John Clare loved ‘the youth of each green thing: The grass, the trees, the bushes and the moss’,  all the greens that are on show before ‘the blooms of Spring’. February is certainly a good month to see the different shades of green in the wood. The different sorts of moss growing amongst the grass and along tree trunks, the lichens on stones and trees are all a source of spectacular shapes and colours on a sunny day if you take the time to look.

Trees which have lichens support more wildlife than others, providing food and shelter for many insects and wildlife and are a useful indicator of air quality and pollution. The loss of ancient trees and woods has caused a serious problem for lichen communities which grow extremely slowly and ‘old woodland’ species can even be used to help identify ancient woodland with other indicator species. Many people think that lichens use the tree as a food source but they simply use it as a place of attachment as the lichen is made up of two organisms, a fungus and a green algae with perhaps a bacterium. The fungus provides support and protection, as well as moisture and minerals from the atmosphere and the algae or bacterium makes food via photosynthesis. Many lichens can be found on dead or dying branches but it’s simply because they need as much sunlight as they can get and young, healthy deciduous trees will block out the light with their leaves for much of the year.

A good way of identifying moss from lichen is where it’s growing, moss (a plant) likes the Northern, shady side of trees and lichens (two different organisms) like the sun.Moss also acts as an important home for invertebrates and  subsequently is an important food source for birds and mammals who like rooting about in it for a tasty snack. Belonging to a group of plants called bryophytes which are thought to have arrived on land about 500 million years ago, moss absorbs huge quantities of rainfall and is reliant on damp conditions for reproduction because the male cells need to move via a film of water to reach the female cells……not just a pretty face then!

We have on our doorstep the most amazing resource to observe and enjoy such fascinating species. The Jubilee wood is just waiting for us to go and share in its treasures. One of the projects which has long been on a list of things ‘to do’ is to record the lichens which have become established in the wood, and if anyone else might be interested and can spare some time perhaps we can make it happen. Talk to Sue Jarvis or Michael Trolove. 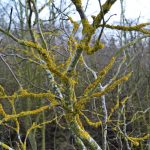 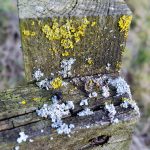 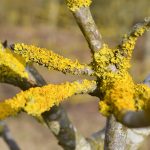