Those of you who relish the idea of the community doing its “bit” will be heartened to learn that over three weekends in the last few weeks various community tasks have been undertaken to address seasonal growth and get the playing field back into shape.

First up the Gidding Gobblers minus the lycra set about the Village Hall car park boundary. The usual – hawthorn and bramble were cut back to expose the perimeter fence and the road boundary hedge. Maintenance to the fences was also undertaken.

The following weekend the front boundary hedge of the Jubilee Wood which was so skilfully laid last winter was trimmed up along with some strimming to the pond and barrows.

The weekend after a small team assembled at the Recreation Field to reinstate the goal crossbar (previously taken into storage because of theft and /or vandalism) Another task undertaken was to dig some sockets into the field for the junior goals to be reinstated. These will go up early in the new year and they are much closer to the field entrance rather than pushed over to the far end of the field.

Users of the trim trail will no doubt be aware that because of rot in the timbers some of the units are starting to disappear. The Recreation field management are keeping a close eye on this but do not despair, plans are bubbling under for a touch of renovation/replacement but it will require the community to engage.

Thanks to all who gave up their Saturday mornings to help. If you missed out then I’m sure  there will be other opportunities in 2018 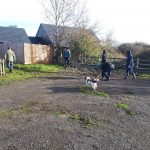 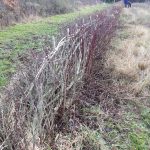 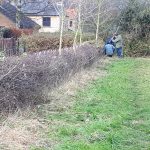 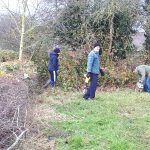 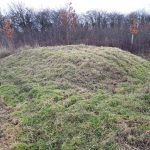 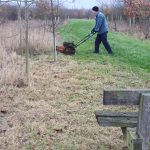 Hedge at the Village Hall 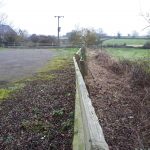 their Saturday mornings to help. If you missed out then I’m sure  there will be other opportunities in 2018