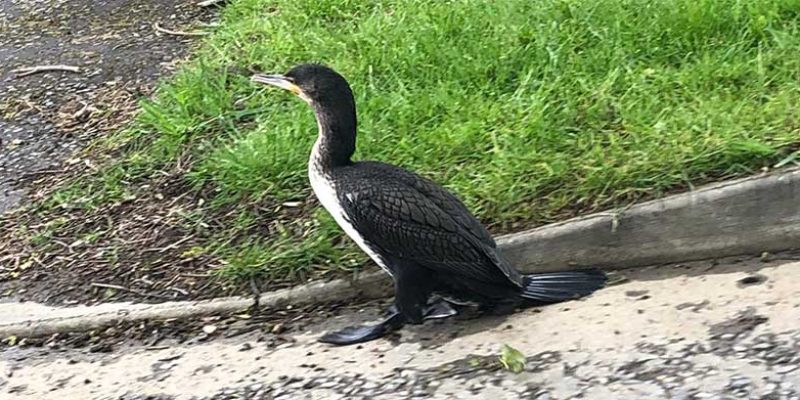 We had a fleeting visitor to Great Gidding on Tuesday, a cormorant, which was first reported outside the end bungalow in Mill Road and then walked and flew down Main Street. Late morning today there were again a number of sightings in Main Street. Eventually, the bird was standing in the road outside the Village Hall whereupon it was later captured and taken into care for its own safety.

Cormorants originally used to be a seabird frequenting the cliffs around the British Isles and Northern Europe; although in recent years they have moved inland, possibly because of declining fish stocks around our coasts. They nest in colonies in trees, locally there are colonies at Little Paxton Nature Reserve with currently about 50 nests. They also nest on the Ouse & Nene Washes, Holme and other places in Cambridgeshire, birds often fly out from the colonies to feed in lakes, particularly those that hold good quantities of fish.

Cormorants are difficult to love, seen up close they are quite reptilian in features having a very sharp hooked beak as Graham, from The Waterfowl Sanctuary, and myself can testify. Cormorants have been persecuted by man in the past because of the adverse effects they are thought to have on fish stocks. They are a protected species under the Wildlife & Countryside Act, but they can be shot under licence to ‘prevent serious damage’ but only after other methods have been, ‘tried and failed’. Cormorants normally feed entirely on fish, obtained during the day by diving from the surface, using their feet to propel themselves under water their wings are held close to their bodies; they stay underwater from 15 – 60 seconds down to depths of up to 9 metres. Most prey is brought to the surface often shaken and thrown in the air before swallowing. After fishing, cormorants have a very unusual habit of sitting on posts with their wings stretched out to dry their feathers.

How did Conrad (or Cormorant Strike as he has also been called) finish up in Main Street? It is difficult to know if it is a he or she, but it is definitely a juvenile bird, (light coloured breast feathers) it will not get its all dark feathers for a year. So my theory is that it is “a baby bird” (or at least a teenager) newly away from its parents; taking those first few tentative steps (or flights in this case) away from home. We have had some bad spells of weather recently and it may have downed the bird and it has not been able to feed as there is no suitable habitat nearby, any local goldfish or Koi may have had a narrow escape.

Graham is currently feeding our Gidding cormorant some recently thawed roach that he has obtained from a fishing bait shop in Huntingdon; he will keep up us updated as to progress. Graham came out very quickly although strictly speaking he deals with waterfowl, ducks geese, swans etc.  His website is here https://www.thewaterfowlsanctuary.co.uk/ and he is very deserving of donations towards his work.

Cormorants have been recorded living up to 20 years old, so let’s hope Graham can get the bird’s strength up and can return it to the wild at a suitable location.