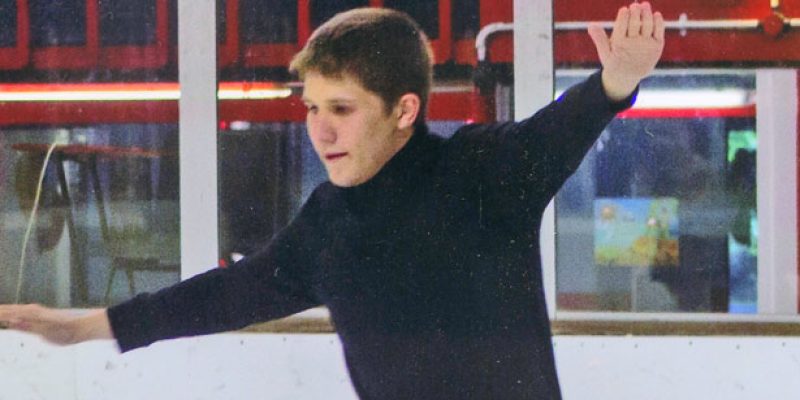 Calum Titmus (20) from Great Gidding has just returned to the UK having competed last weekend in Reykjavik at the Icelandic Inclusive Skating and Special Olympics Figure Skating Championships. He competed alongside competitors from Iceland, Great Britain and Canada. After two days of intensive competition, he came away with two Gold medals. These medals were presented to Calum by the President of Iceland, Ólafur Ragnar Grimsson. This now means that Calum has won 8 Gold Medals at National and International level in three different sports.   This is all the more remarkable when you realise that Calum is Autistic with severe learning difficulties.

Three golds for Calum
Figure Skating as a Special Olympics sport was brought to Britain for the first time in 2012, and last year Speed Skating was added to the event. Calum entered the Speed Skating event at three distances, winning Gold in each race, and is now the first British Special Olympics Speed Skating Champion. Calum is also heavily involved with Inclusive Skating. This is a charity that is trying to set up a family orientated group at each ice rink in the UK. This group will be for anyone with any visual, hearing, bio-mechanical or learning difficulty, along with family and carers who want to learn to skate. Please look out for local fundraising events for Calum and Inclusive Skating.

Calum’s next competition will be the British Inclusive Skating and Special Olympics Competitions at the beginning of November 2014.