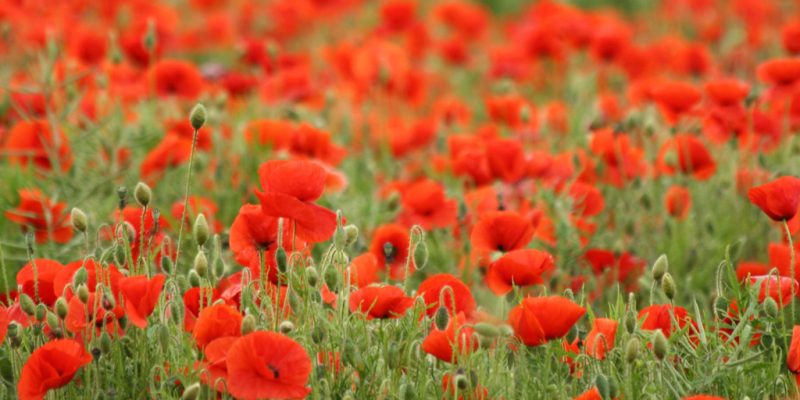 The poppy has a long association with Remembrance Day. But how did the distinctive red flower become such a potent symbol of our remembrance of the sacrifices made in past wars?

Scarlet corn poppies (popaver rhoeas) grow naturally in conditions of disturbed earth throughout Western Europe. The destruction brought by the Napoleonic wars of the early 19th Century transformed bare land into fields of blood red poppies, growing around the bodies of the fallen soldiers.

In late 1914, the fields of Northern France and Flanders were once again ripped open as World War One raged through Europe’s heart. Once the conflict was over the poppy was one of the only plants to grow on the otherwise barren battlefields.

The significance of the poppy as a lasting memorial symbol to the fallen was realised by the Canadian surgeon John McCrae in his poem ‘In Flanders Fields’. The poppy came to represent the immeasurable sacrifice made by his comrades and quickly became a lasting memorial to those who died in the First World War and later conflicts.

In Flanders Fields the poppies blow
Between the crosses row on row,
That mark our place; and in the sky
The larks, still bravely singing, fly
Scarce heard amid the guns below.

We are the Dead. Short days ago
We lived, felt dawn, saw sunset glow,
Loved and were loved, and now we lie
In Flanders fields.

Take up our quarrel with the foe:
To you from failing hands we throw
The torch; be yours to hold it high.
If ye break faith with us who die
We shall not sleep, though poppies grow
In Flanders fields.

McCrae’s “In Flanders Fields” remains to this day one of the most memorable war poems ever written. It is a lasting legacy of the terrible battle in the Ypres salient in the spring of 1915. Here is the story of the making of that poem:

Although he had been a doctor for years and had served in the South African War, it was impossible to get used to the suffering, the screams, and the blood here, and Major John McCrae had seen and heard enough in his dressing station to last him a lifetime.

As a surgeon attached to the 1st Field Artillery Brigade, Major McCrae, who had joined the McGill faculty in 1900 after graduating from the University of Toronto, had spent seventeen days treating injured men — Canadians, British, Indians, French, and Germans — in the Ypres salient.

It had been an ordeal that he had hardly thought possible. McCrae later wrote of it:

“I wish I could embody on paper some of the varied sensations of that seventeen days… Seventeen days of Hades! At the end of the first day if anyone had told us we had to spend seventeen days there, we would have folded our hands and said it could not have been done.”

One death particularly affected McCrae. A young friend and former student, Lieut. Alexis Helmer of Ottawa, had been killed by a shell burst on 2 May 1915. Lieutenant Helmer was buried later that day in the little cemetery outside McCrae’s dressing station, and McCrae had performed the funeral ceremony in the absence of the chaplain.

The next day, sitting on the back of an ambulance parked near the dressing station beside the Canal de l’Yser, just a few hundred yards north of Ypres, McCrae vented his anguish by composing a poem. The major was no stranger to writing, having authored several medical texts besides dabbling in poetry.

In the nearby cemetery, McCrae could see the wild poppies that sprang up in the ditches in that part of Europe, and he spent twenty minutes of precious rest time scribbling fifteen lines of verse in a notebook.

A young soldier watched him write it. Cyril Allinson, a twenty-two year old sergeant-major, was delivering mail that day when he spotted McCrae. The major looked up as Allinson approached, then went on writing while the sergeant-major stood there quietly. “His face was very tired but calm as we wrote,” Allinson recalled. “He looked around from time to time, his eyes straying to Helmer’s grave.”

When McCrae finished five minutes later, he took his mail from Allinson and, without saying a word, handed his pad to the young NCO. Allinson was moved by what he read:

In fact, it was very nearly not published. Dissatisfied with it, McCrae tossed the poem away, but a fellow officer retrieved it and sent it to newspapers in England. The Spectator, in London, rejected it, but Punch published it on 8 December 1915.

Three years later on 9th November 1918, two days before the Armistice was declared at 11 o’clock on 11thNovember, a lady called Moina Belle Michael was on duty at the YMCA Overseas War Secretaries’ headquarters in New York. She was working in a reading room, a place where U.S. servicemen would often gather with friends and family to say their goodbyes before they went on overseas service.

During the morning as a young soldier passed by Moina’s desk he left a copy of the latest November edition of the “Ladies Home Journal” on the desk. Later in the morning, Moina found a few moments to   herself and browsed through the magazine. In it she came across a page which   carried a vivid colour illustration with the poem entitled “We Shall Not Sleep”. (This was an alternative name sometimes used for John McCrae’s poem, which was also called “In Flanders Fields”.)

Moina had come across the poem before, but reading it on this occasion she found herself transfixed by the last verse:

Take up our quarrel with the foe:
To you from failing hands we throw
The torch; be yours to hold it high.
If ye break faith with us who die
We shall not sleep, though poppies grow
In Flanders fields.

In her autobiography, entitled The Miracle Flower, Moina describes this experience as deeply spiritual. She felt as though she was actually being called in person by the voices which had been silenced by death. At that moment Moina made a personal pledge to “keep the faith”. She vowed always to wear a red poppy of Flanders Fields as a sign of remembrance. It would become an emblem for “keeping the faith with all who died”.

Compelled to make a note of this pledge she scribbled down a response on the back of a used envelope. She titled her poem “We Shall Keep the Faith”. The first verse read like this:

Oh! you who sleep in Flanders Fields,
Sleep sweet – to rise anew!
We caught the torch you threw
And holding high, we keep the Faith
With All who died.

Three men attending  a conference in the  building then arrived at Moina’s desk. On behalf of the delegates they asked her to accept a cheque for ten dollars, in appreciation of the effort she had made to brighten up the place with flowers at her own expense.

She was touched by the gesture and replied that she would buy 25 red poppies with the money.

After searching the shops for some time that day Moina found one large and twenty-four small artificial red silk poppies in Wanamaker’s department store. When she returned to duty at the YMCA Headquarters later that evening the delegates from the Conference crowded round her asking for poppies to wear. Keeping one poppy for her coat collar she gave out the rest of the poppies to the enthusiastic delegates.